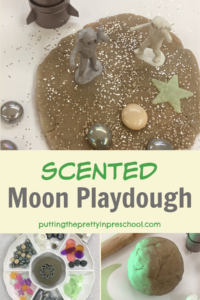 This scented moon playdough is the result of a color and flavor mixing science experiment with jello powder. Can you guess which flavors of jello were used?

To make a big batch of this steely gray playdough that matches the color of the moon, gather the following supplies:

Add the first three ingredients to a sturdy pot and mix them together.

Boil the water and stir in all three packages of jello powder.

Then stir in two tablespoons of oil.

Add the liquid to the dry ingredients and combine.

Heat the pot on the stove on medium heat.

Stirring frequently, cook the mixture until it is no longer glossy and the dough forms a ball.

Scoop the dough onto a cutting board.

Store the playdough in a sealed plastic bag.

Note: The liquid in the pot is very black at first, but when mixed thoroughly with the dry ingredients, the result is gray playdough!

Set out the moon playdough in a compartment tray with the following supplies:

After the playdough has been used a time or two, sprinkle silver glitter and/or foil stars on the dough to extend interest in the play invitation.

Note: This gray scented playdough has a blended grape and lime scent. When I introduced the dough to my preschoolers, I wasn’t sure what they would think. Overall the children felt it smelled pretty nice.

Our moon is mostly hued in lighter and darker grays. But from the earth, we see the moon shine due to reflected sunlight. To us, it often looks bright yellow.

The full moon, which we see once a month, can appear in different colors and sizes. This is due to its position in the sky, the particles in the atmosphere, the amount of air pollution, and the current season.

To see the full moon in a variety of colors, check out a post titled “Colors Of The Moon” by Nasa Science. It features an amazing photo showing different colors our rocky satellite has been viewed and photographed by one astrologer in Italy.

In the home or classroom, a color-changing light is fun to use to illuminate the moon playdough so that it shines in different hues.

My featured light shines red, green, purple, blue, and white. Since the moon has been photographed in tones of red, blue, and purple, this lighting isn’t a stretch. Green is a popular color for depicting aliens, and some moon rocks with a green tinge have been discovered. And so the green lighting works too!

This scented grey playdough also works as a follow-up activity to a discussion about dwarf planets. These small planets are far away, super icy, and take many years to orbit the sun. Some dwarf planets are:

END_OF_DOCUMENT_TOKEN_TO_BE_REPLACED

Can anyone pull out the magic instead of the madne

Beautiful pink peonies are the highlight of this f

Last minute Father’s Day craft that is sure to p