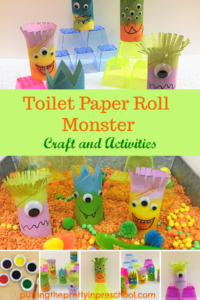 For most of the year, there has been a plethora of recycled crafts and activities posted on blogs and social media, and toilet paper rolls have been a “hot” material for craft and sensory projects. Debuting in this post are spunky toilet paper roll monsters. They are so simple to make and can be used with toys or in sensory bins for imaginative play.

END_OF_DOCUMENT_TOKEN_TO_BE_REPLACED 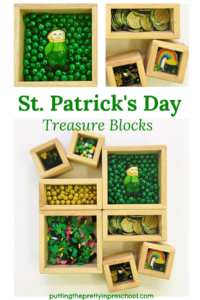 Ten Things To Know About Leprechauns

In Irish stories passed down through oral tradition, leprechauns …

are older in age and have rust-colored beards.

make shoes for a living.

are good craftsmen and musicians.

collect gold for their work. Some stories say they keep it in a pot at the end of a rainbow for safekeeping.

are smart with a quick sense of humor.

are mischievous tricksters. They can easily distract people from getting their gold, or from having three wishes granted.

are hard to catch. Listening for the faint tapping sound of their little shoe hammers is a tip to track them down.

live in remote places and like to be by themselves.

No one has ever seen one!

There is plenty of gold to keep a leprechaun happy in these St. Patrick’s Day-themed treasure blocks.

Items in the treasure blocks:

rainbow and pot of gold stickers on felt backing

END_OF_DOCUMENT_TOKEN_TO_BE_REPLACED 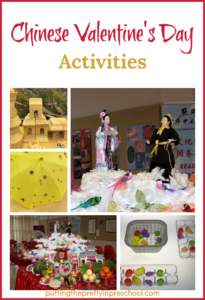 On the weekend of August 25 and 26, 2017, Chinese Valentine’s Day was celebrated at the Edmonton Chinatown Multicultural Center, located in downtown Edmonton.  This traditional Valentine’s Day celebration dates back to the 1800s in China, and is celebrated on the 7th day of the 7th lunar month, in late August.

END_OF_DOCUMENT_TOKEN_TO_BE_REPLACED

A bright and cheery Fall or Thanksgiving Day craft