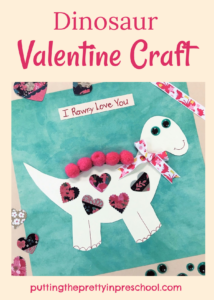 It was just a couple of days before Valentine’s Day when one of my preschoolers said “Remember, Mrs. Kaminsky…you promised to make a dinosaur valentine craft for us to do.” And yes, I had!

We were just finishing up a polar dinosaur theme when I had come across super cute dinosaur Valentine’s Day window clings. They served as perfect transition décor from that winter wrapped dinosaur theme to a Valentine’s Day topic. And they provided lots of craft inspiration, which led me to tell my preschoolers we would do a dinosaur valentine craft.

So this is a very last minute dinosaur-themed Valentine’s Day craft project!

Download one of these two dinosaur templates and print it on 8 ½ x 11-inch cardstock paper in the color of your choice.

This printable is for individual or one classroom use only.

This printable is for individual or one classroom use only.

Fashion a bow from a small strip of thin ribbon.

Cut out the dinosaur, and invite your early learner to use a glue stick to paste it on a 12-inch x 12-inch piece of complementary cardstock.

Then have your little one use white glue to add pompoms to the dinosaur back, wiggly eyes to the head, and a bow to the neck.

Next, have your little learner use the glue stick to add paper or foam hearts to the body, and use a thin felt pen to draw a smile on the head.

Cut out the “I Rawr-y Love You” greeting to add to the craft if desired.

END_OF_DOCUMENT_TOKEN_TO_BE_REPLACED

Could dinosaurs have survived in polar areas of the world? Since fossils of many kinds of dinosaurs have been discovered in cold, icy regions, this question has been carefully pondered. Early learners can explore this idea through polar dinosaur sensory play.

Northern Alaska is the best polar location to find dinosaur fossils, as fossils of many uniquely different dinosaurs have been unearthed there.

Fossils from at least eight types of dinosaurs have been discovered in Antarctica.

Dinosaur fossils have also been found in Siberia, Canada, southern Australia, New Zealand, and the southern tip of South America.

There have been discoveries of dinosaur trackways, footprints, teeth, skin impressions, and bones.

Collecting dinosaur fossils in polar regions is challenging because of the extreme weather conditions, rugged, hard to access places and difficulty in removing fossils.

A simple way to incorporate the idea of polar animals living in cold parts of the world is to set up a polar dinosaur sensory tray.

Items in the tray:

This is an eye-pleasing tray that is bound to draw children in. It works well for individual sensory play.

You can use most of the above items for a polar dinosaur playdough tray. I exchanged the dinosaurs for miniature ones and took out the cotton balls.

For the oh, so soft playdough recipe, click here.

END_OF_DOCUMENT_TOKEN_TO_BE_REPLACED

Invitation to decorate a Chinese money tree. This