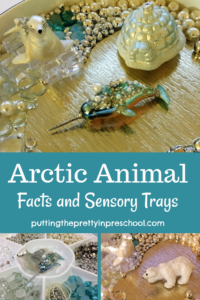 These Arctic animal sensory trays are inspired by a set of polar decorations spotted at a local hardware store. I saw them before Christmas and restrained myself from buying them. It was tough! I didn’t think of them again until just into the New Year, but then I just had to have them. Thankfully, one hardware store in the chain still had a full selection and I was able to buy the decorations for winter displays and sensory play.

A large round tray, silver plastic table mat for water or ice, and the following loose parts work well with arctic animal figurines:

The polar decorations featured in these trays are breakable, so should be handled carefully. After discussing and exploring figurines such as these with your early learners, replace them with unbreakable Arctic animal and igloo toys for further learning and play.

The first two sensory trays showcase seals and narwhals. Here are some facts about these aquatic polar creatures:

Narwhals are small whales nicknamed sea unicorns. Males have a tooth that grows through their lip to form a spiraling ivory tusk. The tusks grow throughout the whales’ lives. Narwhals live in groups in the cold icy waters of the Arctic. They have been overhunted for their sought-after tusks so are hard to spot.

Six kinds of seals live in the Arctic. The seals spend much of their time in the frigid waters on or under the ice.  When the ocean freezes each year, they chew breathing holes through the ice with their teeth. They come up for air every few minutes, trying to avoid predators in the process.

This next tray features a polar bear, seal, and narwhal.

Polar bears are large, creamy white bears that weigh up to 1100 pounds. They have black noses and eyes and can walk and swim long distances. Polar bears live on ice floes, rocky shores, and islands in the Arctic. Their tiny bear cubs are born in December in dens on land or ice. The cubs live with their mothers for about two years.

Below is a narwhal, seal, and igloo sensory tray.

Igloos are dome-shaped snow houses that can be large or small. They are made with slanted rectangular blocks of packed snow cut by skilled carvers. In times past, igloos were used as a winter home or temporary hunting shelter. The igloos were super strong and able to withstand fierce winds and polar bear attacks. The snow homes were heated with oil lamps and could get pretty toasty. Furs lined sleeping areas and covered doorways.

The penguin below adds a cuteness factor. Penguins live in the Antarctic on the opposite side of the world but are also polar animals.

END_OF_DOCUMENT_TOKEN_TO_BE_REPLACED

Could dinosaurs have survived in polar areas of the world? Since fossils of many kinds of dinosaurs have been discovered in cold, icy regions, this question has been carefully pondered. Early learners can explore this idea through polar dinosaur sensory play.

Northern Alaska is the best polar location to find dinosaur fossils, as fossils of many uniquely different dinosaurs have been unearthed there.

Fossils from at least eight types of dinosaurs have been discovered in Antarctica.

Dinosaur fossils have also been found in Siberia, Canada, southern Australia, New Zealand, and the southern tip of South America.

There have been discoveries of dinosaur trackways, footprints, teeth, skin impressions, and bones.

Collecting dinosaur fossils in polar regions is challenging because of the extreme weather conditions, rugged, hard to access places and difficulty in removing fossils.

A simple way to incorporate the idea of polar animals living in cold parts of the world is to set up a polar dinosaur sensory tray.

Items in the tray:

This is an eye-pleasing tray that is bound to draw children in. It works well for individual sensory play.

You can use most of the above items for a polar dinosaur playdough tray. I exchanged the dinosaurs for miniature ones and took out the cotton balls.

For the oh, so soft playdough recipe, click here.

After using snowflake and dinosaur confetti in sensory trays, sprinkle some in a large clear plastic water bottle. Then add mini dinosaur figurines and water. Set the bottle out as a sensory tube for little learners to explore.

What Scientists Think About Dinosaurs and Polar Regions

Some dinosaurs could have lived in dark, chilly places, and may have hibernated in winter. Others could have adapted to the colder weather.

Still others may have migrated to polar regions in spring/summer because food was plentiful like many animals do today.

When dinosaurs roamed the earth the climate around the world was much warmer than today. Although polar lands had freezing temperatures and some snow, the weather was milder.

Fossils of leaves, pine needles, and trees show evidence that many polar areas were covered with forests when dinosaurs lived.

END_OF_DOCUMENT_TOKEN_TO_BE_REPLACED 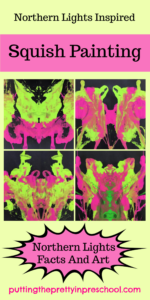 Northern lights, or auroras, are nature’s majestic light shows sent from the heavens to earth. They are spectacular to view and stunning in photographs or art.  A northern lights squish painting project celebrates the vibrancy and uniqueness of this natural light display.

This art activity is inspired by the colors and shapes of northern lights.

Fold 12-inch by 12-inch pieces of black construction paper in half. Set out bright green and magenta tempera paints.

Invite your child to spoon both paint colors onto the paper.

Ask your early learner to fold over the paper and rub a hand over it.

Encourage your child to open the paper and admire the art. It is always exciting to see the designs created.

Offer string to add interest to the art activity.

Ask your little learner to drop magenta paint onto the paper, and lay a string in green paint. Pressing over the string with a spoon is helpful to make sure the string is paint-soaked.

Next, ask your child to lay the string on the paper in a serpentine shape.

With one hand lightly on the folded paper, have your child pull out the string slowly and carefully.

The art will be stunning.

Paint colors can be varied by introducing turquoise, red, or pink.

A longer string can be used.

Paint can be dripped and paint-soaked string can be applied more than once on each art project.

END_OF_DOCUMENT_TOKEN_TO_BE_REPLACED 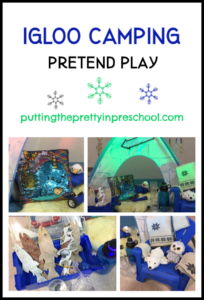 It’s been said that you should buy beautiful things you are drawn to, even if you are not sure how they will fit into your decorating color scheme or wardrobe collection.

When I purchased a narwhal-themed sequin pillow, I wasn’t sure how I would use it in preschool play. I loved seeing color and shape change sequins in children’s clothing and thought a sensory item like this would be nice to explore in the classroom.

To set up a glammed up igloo pretend play center, collect the following:

A rope with clothespins strung behind the igloo to hang up fish to dry facilitates fine motor skills.

A color-changing light gives the igloo a green or blue glow.

“Glamping” is a form of luxurious camping. Are you a camper or more of a glamper? Share below.

END_OF_DOCUMENT_TOKEN_TO_BE_REPLACED

Have you ever heard of orange or yellow watermelon

Today is Lemonade Stand Day in and around our city

Just a little watermelon tablescape as a dramatic

When you are collecting school supplies, save some

Watermelon playdough tray. The recipe is so easy t