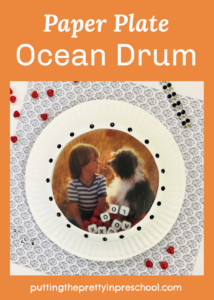 Ocean drums are versatile musical instruments that imitate the soothing sound of gentle waves hitting the shore. Your early learner can help create a paper plate ocean drum to make water sounds and will be able to use it in many other ways. The drum can be personalized and will look awesome displayed.

Cut out the middle part of one paper plate.

Print a favorite photo onto cardstock paper. Or use a picture from a vintage calendar or magazine. Trace a 15.5 cm / 6 1/8 inch circle around the part of the picture chosen for the drum. Cut the circle out and use glue tape or a glue stick to paste it on the center of the second plate.

Cut the same sized circle from a clear file folder or sheet of transparency film.

Use a glue gun to attach the clear circle to the cut plate.

Sprinkle cinnamon candy hearts, letter beads, and small round beads onto the photo-enhanced plate. Alphabet letter beads that spell love or the name of a child or pet would work well.

Glue the edges of the two plates together with a glue gun.

If desired, decorate the paper frame of the drum with adhesive gems.

The crafted drum can be played many different ways, creating a variety of sounds:

Tilt the drum in all directions by rolling your wrist slowly while holding the instrument by its frame. The encased beads and candies will roll over the bottom and mimic the relaxing sound of waves lapping the shore.

Stop and start playing the instrument suddenly to make the sound of crashing waves.

Hold the drum over your head and tilt it.

Move the drum around your body.

Tap the drum gently with a drumstick.

Use the percussion instrument as a shaker.

Tap or shake a pattern of sounds.

END_OF_DOCUMENT_TOKEN_TO_BE_REPLACED

These ice drum musical instruments can be played outside or indoors any time of the year. The musical activities are inspired by the Siberian percussion group Etnobit, who experimented with playing ice on Lake Baikal, the world’s deepest lake.

When frozen, remove the ice shapes from their molds and place them in a tub. Sprinkle snow in the tub first if it is available. Add drumsticks and objects for striking the ice.

Invite your early learners to experiment with drumming sounds on the ice chunks.

The little learners can also tap their own melodies on the ice drums.

Another frozen water musical activity is to fill clear drinking glasses with varying amounts of colored water. Freeze them overnight and then set them on a table in a row. Have your little charges tap the water glasses with drumsticks to make higher and lower notes and experiment with melody making.

END_OF_DOCUMENT_TOKEN_TO_BE_REPLACED

Collecting supplies for a lemonade stand is as ref

This little bunny is engaging in a little self car

Another set of eggs that won’t be stored in the

I may have been a little obsessed with leprechauns

It’s “clover” for this little leprechaun who

Dragon necklace craft my preschoolers will do this

Embrace the “winter blues” with these winter-t

Easy and fun winter playdough. Link in profile for