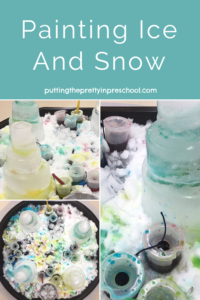 A painting ice and snow center is one of the easiest activities you can set up, and little learners love to participate in it. Stacking the frozen ice into triple-layer cakes will level up the fun factor and visual appeal.

For this frozen-themed snow and ice sensory table activity, gather the following:

Setting Up The Painting Ice And Snow Activity

Set the activity tray on a round table covered with a tablecloth.

Scoop up snow in a large pail and dump it into the tray.

Take out the ice shapes from their molds and drop them on top of the snow. Stack smaller ice chunks on larger ones to make triple-layer cakes.

Add liquid food colors to paint containers, or mix a little food coloring into water to make the hues. Featured are paints in primary colors.

Include brushes and invite little learners to paint the ice cakes and snow.

The watercolors in the containers stay quite pure in this activity, without having to ask anyone to rinse their brushes between hues used. And there will be lots of excitement when new colors such as green and purple pop up in the snow.

If you are short on preparation time, offer snow, ice cubes, and paints with a variety of kitchen accessories. Think muffin tins, bowls, spoons, pans, and frozen dessert sticks. Your little charges will enjoy painting the snow and ice cubes, and will excitedly use the accessories in snow kitchen activities.

If snow is not available where you live, the activity will work fine with ice shapes alone. Little learners will be thrilled to focus on painting the ice cakes and can add ice cube embellishments.

END_OF_DOCUMENT_TOKEN_TO_BE_REPLACED 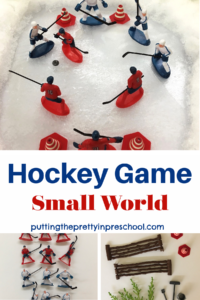 If you say the word “hockey”, you may think of Canada, and when you say “Canada” you may think of hockey. That’s because in the late 1800s the game of hockey was developed in Canada, and has been a popular game for Canadians to play ever since. Because I live in Canada, I’ve been dying to touch on the sport in a blog post. And this hockey game small world is a fun way to introduce the outdoor winter game to little learners.

Hockey is a lightning-fast team sport played on ice. Players wear skates and helmets, and use sticks and a small rubber disc called a puck in the game. There are usually six players on each team. One of them is the goalie, who guards their net. The other players try to shoot the puck into the opposing team’s net. If they do, their team gets one point.

Although now there are many indoor hockey rinks to play the game on, the sport was traditionally played outdoors. An outdoor backyard or pond rink is featured in this post.

Here are the supplies in the hockey game small world set up:

Freeze a layer of water in a square or rectangular tray. This will be the skating rink.

Pack snow around the edges of the tray to make snowbanks.

Add fence sections and accessories such as a pail, shovel, and broom to the snowy areas.

Stick in evergreen sprigs to serve as trees. My “trees’ are lemon cypress sprigs taken from the plant I used for Christmas Playdough.

Lay two pylons on each end of the ice to be the goalposts. If you have toy goalie nets, such as the ones that come with Playmobil hockey sets, use them instead.

Set the goalies in front of their nets. These players have wider sticks and more protective gear than their teammates, and that’s how you can distinguish them.

Arrange the rest of the players on the ice and add the bead puck. I feature a goalie and three players. If your sensory tray is large enough, add five players to each team in addition to the netminder.

The ice and snow in the tray offer sensory play opportunities. And little learners get to practice fine motor skills and eye-hand coordination when they give each hockey player a stick.

Where I live in Alberta, there is plenty of snow for at least four months of the year. So there is little need to try any instant snow options. If you do not have snow where you reside, a blog post by Playing With Rain features six homemade snow recipes to try.

END_OF_DOCUMENT_TOKEN_TO_BE_REPLACED 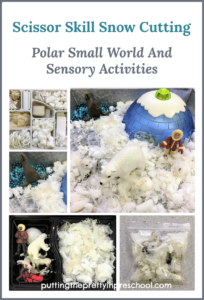 A scissor skill snow cutting activity snipping craft supplies is sure to attract your child’s attention. A rich base will be created for small world and sensory activities. A bonus is that this snow will never melt or be too cold to play with.

Go on the hunt for white, neutral, and silver craft supplies:

Fill a storage tray with items for cutting.

Set the tray with scraps on a table along with pairs of scissors. Invite your child to choose pieces to snip smaller over a cookie sheet. Feel free to join your child in making snow.

Encourage your child to stand and cut. Studies show that children sit down for an enormous time each day, so adding activities where they are on their feet reduces sedentary time. (View an article that cites the benefits of standing versus sitting at standupkids.org.)

The variety in materials offered facilitates scissor skills. For instance, stiffer pieces are easier to hold with the helping hand and harder to cut items increase small muscle strength in the cutting hand.

Cutting practice with craft scraps offers a non-threatening way for young children to develop scissor skills. There is no wrong way to do it, so frustration is minimized. Children can experiment and cut the materials that work for them.

Early learners can start using scissors with guidance. For tips on teaching children to use scissors, view my post “Santa’s Beard Scissor Activity.”

Once there is a little pile of cut snow, use it in sensory and small world activities.

Bead garland water, an igloo, and polar animals are highlights of this small world.

Place the fake snow in one compartment, and the figurines in the other. This tray can be taken along on outings with the lid snapped on.

A large snack bag or small freezer bag can house reusable snow and figurines of any kind. This sensory bag is also portable.

END_OF_DOCUMENT_TOKEN_TO_BE_REPLACED

Have you ever heard of orange or yellow watermelon

Today is Lemonade Stand Day in and around our city

Just a little watermelon tablescape as a dramatic

When you are collecting school supplies, save some

Watermelon playdough tray. The recipe is so easy t